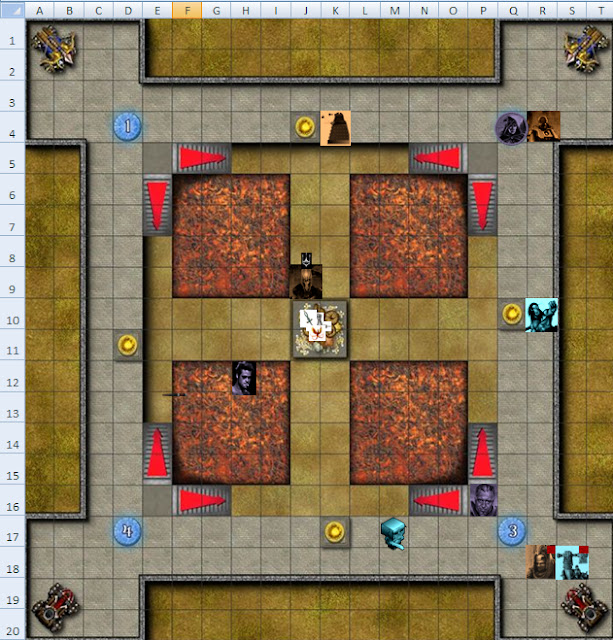 Renato has delayed his turn. GIBBED!
Og has delayed his turn. GIBBED!
Morthos has delayed his turn. GIBBED!
Kludge wins initiative; CRITICAL INITIATIVE! Initiative order is reversed.
Sarah Connor loses initiative and acts first; Respawn at Location 3. She slides back behind the east catapult and casts defensive spells.
Renato Respawn at 4 and attempts daring feats of acrobatics and fruity flips in pursuit of the Armory of Last Resort. Victorious, he claims the fabled Wand of Fireballs.
Ugarth Respawn at 2. He charges south, axe held high, and CRITICAL HIT! expending every ounce of strength, Ugarth slices through his foe shoulder to waist! GIBBED! YOU HAVE LOST THE LEAD!
Dav'd Respawn at Location 3. He casts a spell of flicking lights, momentarily confusing and confounding his enemy. Despite his advantage, his attack fails to connect. Reorienting his gyros and sensors, Dav'd attacks again, unleashing burning starlight IN THE FACE! Ugarth is bloodied.
Teddy Grumpkin Respawn on 4, strides forth across the battlements and cheers on his victorious clansman! Ugarth is no longer bloodied.
Og Respawn on 1. Hastily casting his tribal magic, he tries to blend in with his surroundings, but his heavy orcish footfalls give his position away to all. Angered, his fist clenches and grasps a glowing ball of energy, ready to unleash upon his foes.
P3-10R Respawn at Location 2. It wheels to position and launches a devastating bolt from the ballista, plowing through everything in its path, including the invisible Og! Og is badly wounded by the attack and is bloodied.
Morthos Respawn at Location 2. This dungeoneer is acting fast and acting hard; going for a ballsy maneuver of attacking both enemy teams on the same turn. Og is dropped where he stands and the pretty-boy Renato is hypnotized into taking a bath in boiling blood! He better hope someone gets his skinny ass out of there quick!
CT Feltek Respawn at Location 3. Feltek unleashes his daily evocation for quite the swarm of bees, or is it dogs?, or maybe dogs that shoots bees from their mouths when they bark? In any event, the theme of Team Playoffs! is started to show through a little bit, and it will be an interesting to see how this defensive style of play really pans out in the ultra-aggressive FTDM arena.
Odesso Respawn at Location 1. In a stunning, daring maneuver, Odesso grabs the fabled Lost Crown of Tesh-Naga and DOMINATES the smirking CT Feltek. A poor turn of events for the paladin after his rather impressive first turn display. Just think, this is only the "boring" first round!
Alecto Respawn at Location 2. His starts off with a classic setup for a rain of magic missiles, and pounds the bloodied Dav'd from afar.
Kludge Respawn at Location 3 for the final dungeoneer acting in Round 1. He pops into the thick of things at the crowded southeast corner. He prepped up an impressive number of triggered damage and went for the gold, but the dice did not favor the Orcs this time.

The allure of the wealth of the gods is too much for some to handle, and their weak minds betray them. Og the Smart, dying on the castle parapets, weakly props himself up and crawls towards the glittering gold, and falls to his death. GIBBED! YOU HAVE LOST THE LEAD! Alecto fares little better, as he is now in danger of seeing our first telefrag! Yay, gibs!

It only gets better from here, gents!

My thanks to everyone's patience with the pbp system, their integrity with dealing with these over the top character builds, and their quick response times.

Email ThisBlogThis!Share to TwitterShare to FacebookShare to Pinterest
Labels: Play-by-Post

New comments are not allowed. 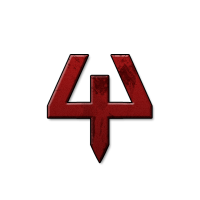